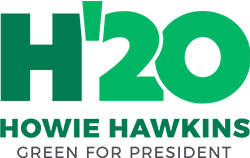 In the 2020 election, Joe Biden and Donald Trump seem to be the frontrunners. With all of the media attention surrounding them, you may be surprised to learn that there are other options. That’s where Howie Hawkins comes in. He’s the Green Party’s nominee. In case you don’t know what The Green Party is, they state that they are “an independent political party that is connected to American social movements, and is part of a global Green movement that shares key values, including our Four Pillars: Peace and Non-Violence, Ecological Wisdom, Grassroots Democracy, and Social Justice, and our Ten Key Values.” Considering their name and mission, I would expect Hawkins to be passionate about the environment, so I researched his environmental beliefs, achievements, and plan for the country. We also analysed Donald Trump and Joe Biden.

Howie Hawkins has not held any government positions. He served in the Vietnam War, but was actively against it, according to the Green Party website. He’s a cofounder of the Green Party and the Clamshell Alliance, a group against nuclear power. We have a post dedicated to nuclear power that you can read by clicking here. Hawkin’s lack of political experience is worrying. He ran for governor of New York in 2018, but got less than two percent of the vote, according to The New York Times. If his voice can’t be heard at the state level, it’s hard to have faith in him gathering national attention.

Hawkins calls his plan the “ecosocialist Green New Deal.” He hopes for  the United States to run on 100 percent clean energy by the year 2030 and improve the economy by doing so. He has bold plans such as universal Pre-K and free public higher education. For K-12 students, he wants to cut public school class sizes to a maximum of fifteen. (As a student, I understand the need for that, as most of my classes have about thirty students.)

These plans will cost a lot of money, so he has a section explaining how he will fund them. A lot of the money will come from environmental taxes. These taxes include a carbon tax, which taxes the amount of fossil fuels people and corporations emit; a land value tax, which taxes landowners based on the property of the land; severance taxes on the extraction of natural resources and fossil fuels; and steering taxes for pollution.

Howie Hawkins envisions a clean economy and has steps to get there, but his lack of experience and ability to be noticed is concerning. Personally, I didn’t know who he was before I wrote this, and maybe you didn’t either. EarthPlex approves of his policies, but would have liked to see more political experience. If you are not eligible to vote, share this with somebody who is!

Read our analysis of Kamala Harris by clicking here!

Read our post about Joe Biden by clicking here.

Read our post about Donald Trump by clicking here.